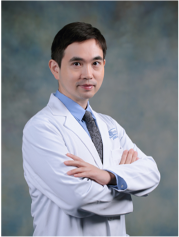 Dr. Fan, Xiaotong was born in Qidong City, Jiangsu Province, and completed his primary to senior high school studies in Qidong City, Jiangsu Province. From 1998.09 to 2006.06, and from 2007.09 to 2010.7, he successfully completed undergraduate to doctoral studies at Peking Union Medical College and Capital Medical University, and obtained his M.D. degree. From 2009.03 to 2010.04, Dr. Fan finished basic research training in Kentucky University, U.S. Dr. Fan has been in the neurosurgery department of Xuanwu Hospital since 2006 and in the has completed his clinical training in all the subspecialties of neurosurgery department. From 2010 till now, he became a member of the functional neurosurgery team. Now he mainly focused on epilepsy neurosurgery. He is married and has a son.

2013 Certificate of resident standardized training of Surgery (Neurosurgery) Phase I